Automate task entry from PC to Omnifocus or Things

I share the problem of many - I have mac/ios at home and PC at work, where I spend most of my time…

I’m wavering between Things and Omnifocus (I prefer the look of Things, but Omnifocus seems to be doing more of what I need it to do…). I thought I could have a running text file in taskpaper format on my PC at work and at the end of the day have it converted to tasks in either Omnifocus or Things.

I love the idea of automating this, but I am an absolute newbie (two days ago I opened the script editor for the first time…).

So, the idea would be:

Oh, and for my wishlist…

OK, so I managed to answer my own question by writing my very first Siri Shortcuts from scratch

It’s probably to easy for most, but exciting for me, and perhaps some other newbies will find it helpful: 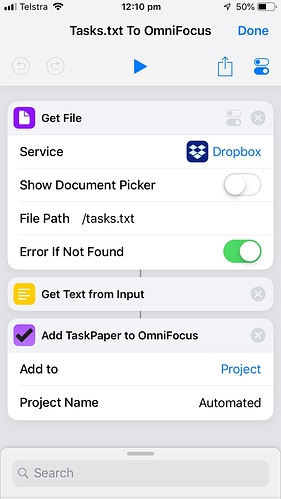 step two is automating it, though I think I might actually enjoy hitting the shortcut on my home screen as part of my “done with work for today, thank you very much”-routine as I leave the office. I might instead record a Siri voice command such as “done with today” and that will run the shortcut.

now for the calendar scheduling…! Where’s that wonderful @RosemaryOrchard OF to Calendar Shortcut again…?

not to worry I will find it