Append item to existing note with a checklist?

My wife and I have started a running list of movies to watch, and instead of futzing around with opening the note every time I want to add something, I’d like to set up a shortcut that will append whatever movie we think of to that running list.

I thought I had it, but I can’t figure out what I’m missing.

Thanks for any help.

Shouldn’t they be the other way around with the filter identifying the note first and thenpassing that into the note parameter of the append?

You’ll want to change the name of the note in the first step and the prompt in the second, but this is the gist. 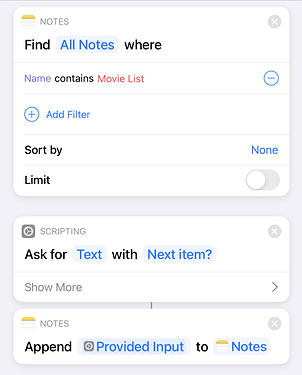 That’s what I thought, initially, but I couldn’t get it to work. I’ve never made a shortcut with more than two steps before, so this was stretching me!

Tha’s perfect, and exactly what I wanted. When I went to see what a “magic variable” was to begin with, someone had linked to your site, drdrang, so I’ll go back and read more of that today.

They may have directed you to me because I really struggled with magic variables when I started using Shortcuts/Workflow and did a lot of my learning in public. Figuring out what they are and how to use them effectively is the key to working in Shortcuts.