Rather than having three map apps on my home screen, I wrote a simple little app picker shortcut that puts up a list of the three apps, and then launches the one chosen. This works just fine, but it launches shortcuts after the menu choice is made and then launches the requested app. Is there another way to do this that doesn’t launch the Shortcuts app? 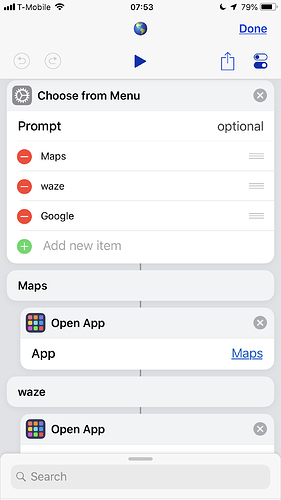 Not if it is still going to be a link on the home screen. The home screen link is a direct link to the custom shortcut in the Shortcuts app.

You could access it via the Shortcuts launcher widget and then given it is only a basic menu, it should just run in the widget without jumping you into the app. But if you are doing that just for app shortcuts I’d recommend looking at Launcher and Launch Center Pro as they give arguably you better widget options for launching apps. Especially Launcher as that is it’s specific purpose - launching from a widget (or even multiple widgets!)