Combinations! Lately, a lot of the best Mac automation tools have become conversant with each other. In this episode, Rose and David discuss the best ways to make automation apps work together.

Very Good Episode. I am anxious to try some of these new ideas!

Really good show as usual. I never considered the shortcuts I could run after a Hazel action before.

One thing I found interesting is that David has moved to BTT for the hyper key.

During the early days of M1 I was getting kernel panics from Karabiner on restart so I tried BTT for about 6 months. I’m not sure if I’m alone, but on my Mac Mini with a Magic Keyboard I was getting about a 75% success rate with the BTT hyper key which was really frustrating. Recently I decided to try Karabiner again and I’m getting 100% success with no panics.

I loved this episode (I deeply enjoy all of them, but this one even more) and wanting to share it with many people I know who are just getting into Mac automations, but the shownotes are missing links to things mentioned.

The big one missing is the link to the Keyboard Maestro site (the wiki is covered, which is awesome, but for those new the main site should also have a link).

Many things listed in the segment, “Apps that added Shortcuts support”. I have or had many of these and there were good things mentioned, but now have to go back an listen to get that list. I had removed one or more of the apps mentioned as they were helpful, but I needed a workflow to take advantage of them.

To help maybe have the episode links listed by segment and pre-drop the links in.

Supporting this idea. There are so many segments that I want to go back to and implement and my automation skills are at the stage when the idea is not enough. I need to listen carefully and make notes.

I’m inspired to do more with my Streamdeck. My biggest question: if I change over to allow BTT to control the streamdeck, does that mean that the KM Link items won’t work? I really like TJ Luoma’s Fantastical icon and would hate to lose it.

There are two operating “modes”. You can either let BTT do everything, or you can use it as a plugin with the Stream Deck software. The former means you need to recreate everything you want to keep in BTT, the latter means you don’t. See the docs for details.on what and why you might choose a mode over another.

If you did want to go down the route of fully BTT controlles, you would be able to trigger KM macros via a URL very easily (I often use my Conductor workflow for Alfred to grab trigger URLs for use in other apps).

For the calendar, that uses icalbuddy, a shell script and KM to mange it and update the Stream Deck button. I strongly suspect you could port this relatively easily to a BTT script widget.

I have a question re running shortcuts from Hazel. I have create a shortcut that accepts Files input from Finder and the Services Menu (and I’ve also checked the Show in Share Sheet option). Works fine as a Quick Action on a particular file.

I wanted to have Hazel automatically run this Shortcut on certain files…but when I choose “Run Shortcut” as the action in Hazel my particular shortcut is greyed out.

Is there a way to configure the shortcut’s Details pane to make this work?

One thing to be careful of with “mix and match” automation is “boundary crossing”. I can think of 2 aspects:

Neither of these is to outright inhibit “mix and match” but they’re worth thinking about.

Thank you for clarifying. I will try the BTT widget approach

I always enjoy and learn a lot from the discussions, but have a question about what seems a significant omission in the automation apps discussed. There is a lot of talk about StreamDeck, but I don’t believe that I have ever heard TouchPortal discussed. (Touch Portal doesn’t turn up in forum search either.)

TouchPortal turns an iPad, iPhone, or Android into a touchpad with as many as 108 buttons and sliders on an unlimited number of screens. I mostly use it to launch Keyboard Maestro macros, but the programmable interface is fairly powerful in its own right. The software is also a lot less expensive than a StreamDeck, assuming that you already have a device to use.

The image below shows my Obsidian control screen, which lives on an old 9.7-inch iPad. 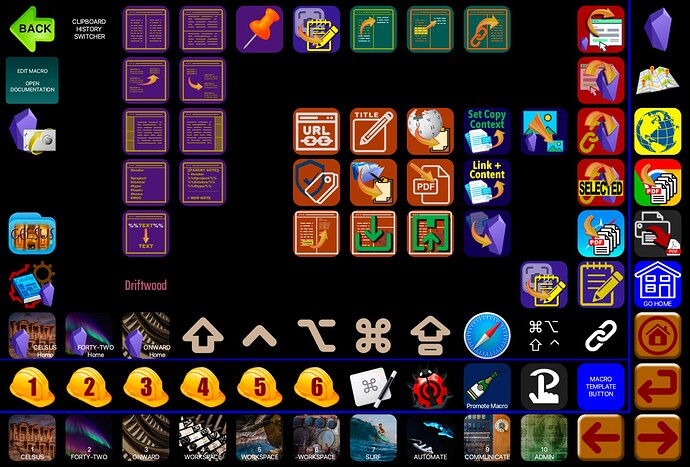 There is mention of it on the ‘sister site’ MPU Talk.

I’m using it on an iPad Air first generation and it works fine for my needs. And it let me repurpose old hardware that was otherwise just gathering dust.

Works with Mac and Windows, and as @JeffHester noted it is very affordable assuming you have a device to use.

I had also looked at the Stream Deck iPhone app and MetaGrid, and Touch Portal was cheaper and worked on my older hardware. It is in active development, with an update just this week.

Take a look at Touch Portal.

That episode is out now!

I took a look at MPU Talk, and second the comment about Touch Portal’s active development and support. That includes bug fixes as well as features such as the recent addition of direct control of audio channels. Nothing is 100% bulletproof, but in my experience reliability is on a par with Keyboard Maestro.

@MevetS, can you speak to feature by feature comparisons with StreamDeck? All that I can say personally is that TouchPortal does everything that I have needed it to for my workflows, and makes a brilliant front end for Keyboard Maestro.

I look forward to hearing conversations about TouchPortal on the podcast. I’m certain that some fraction of the community would find useful, and I’d love to hear what other people do with it. It definitely belongs in the same stable of applications as many of those commonly discussed.

@MevetS, can you speak to feature by feature comparisons with StreamDeck?

Alas I cannot. When I was looking for a “bunch of buttons” app I quickly settled on Touch Portal for these reasons:

Like you I’m surprised this app isn’t discussed more. It’s cheap (US $14 one time), runs on older hardware (my iPad Air was discontinued in 2016), is actively developed (an update this month), and does the job I want a ‘bunch of buttons’ device to do.

Like @RosemaryOrchard and @MacSparky, I think I’d love a StreamDeck if I spent the majority of my time on my desktop system. Since it doesn’t seem practical to carry my StreamDeck around to house, I’ve resisted the temptation to buy one. (With few exceptions, I like to have my iMac and MacBook Pro function identically.)

I loved this episode. Kudos to @RosemaryOrchard and @MacSparky for another podcast jam packed with useful information!

I’ve written many shortcuts (primarily is iOS) and Keyboard Maestro macros, but I hadn’t taken the time to explore this new interoperation (available in KM v10.1+). However, this podcast episode and a recent post of the Keyboard Maestro forum, Getting Started with macOS Shortcuts, motivated me to give it a try. As I started testing, I was primarily focused on methods to transfer data. If you are interested is this topic, a post I contributed on the KM forum will give you a jumpstart. 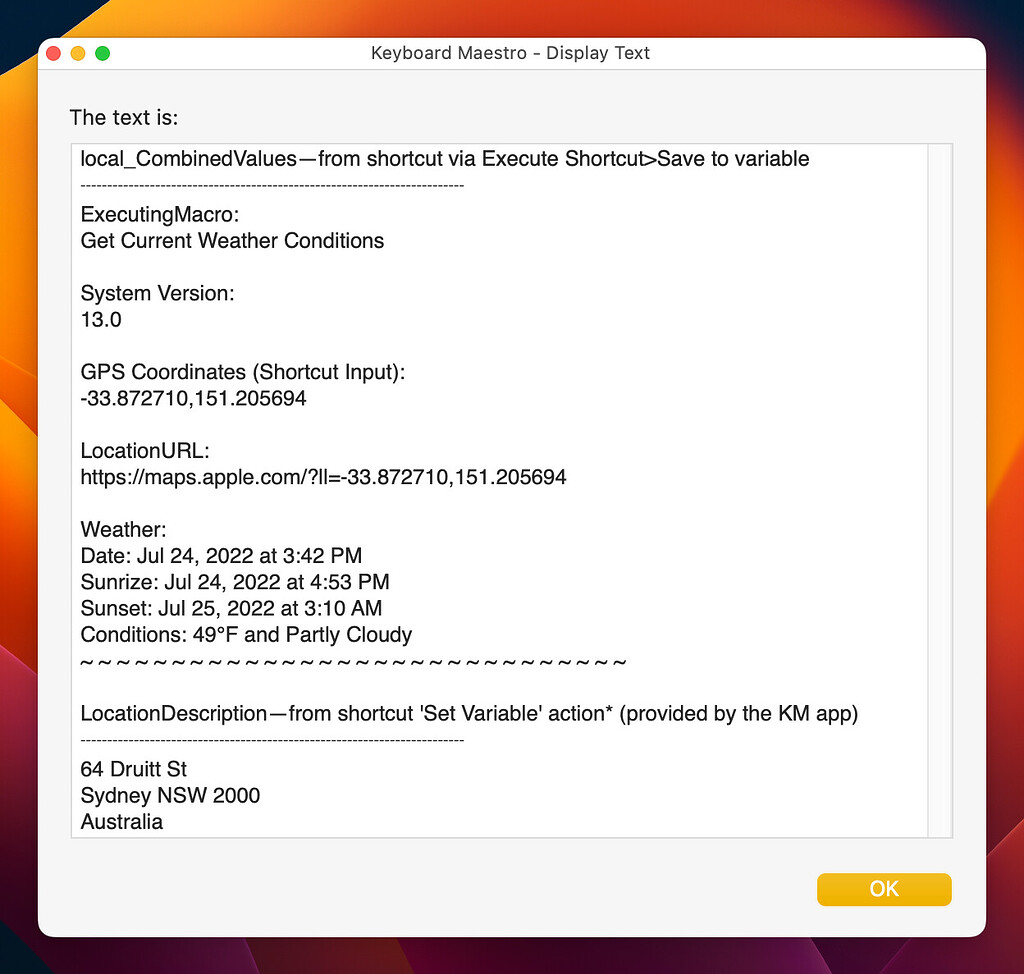 I'm currently using Ventura 13.0, Developer beta 3 (22A5295i). @rolian reported that the macros and shortcuts below behave as expected using Monterey 12.5. 2022-07-24 Update: Please note that this post and the comments in the example macros and...

@jim_sauer Historically I’ve tried to keep iMac and MacBook Pro in as close to the same configuration as possible, although I have to confess that the Pandemic did a pretty good job of breaking that discipline… But yes, since TouchPortal is just another app on the iOS device you still have full use of your phone/iPad for other things.

One issue that I’m aware of is connecting when not local. TouchPortal supports USB connection between Windows and Android devices, but they don’t support USB connections to iOS devices (yet?).

As an example of the kinds of things that I actually do in TouchPortal, in the screenshot I posted there is a green button that reads “Edit Macro / Open Documentation.” When I tap that button it turns red and sets a mode where instead of executing a command, tapping another button opens the associated macro for editing (or other documentation). Another example is the green back arrow in the upper left, which takes you back to the previous TP window. That makes it easy to have things like for the purpose windows containing app-specific commands that are opened automatically when the app is launched. None of that is especially challenging or fancy, but I find it very useful.

I look forward to hearing your reactions to TouchPortal! I think that you’ll find it useful. I am still hoping someone with experience with both TouchPortal and Stream Deck will chime in. I am curious what if any functionality is lost/gained going from one to the other.

Hi, @JeffHester. Thanks for describing some of the ways you use TouchPortal.

One issue that I’m aware of is connecting when not local.

Thanks; I wondered about that.

TouchPortal supports USB connection between Windows and Android devices, but they don’t support USB connections to iOS devices (yet?).

I suspect that’s a limitation of iOS. If developers had access to Continuity, it seems like it would be an ideal approach.