I got the alignment errors to go away by signing up for the beta.

Spacers add fixed or flexible spacing to a widget. Adding a spacer before other content in the widget, will push the content down to the bottom. This is equal to (the now removed) bottomAlignContent() function. Now if you instead added a spacer below the content, it would be pushed to the top, which is equal to topAlignContent().

Replacing these fairly straight forward functions with spacers might seem like an odd decision at first. Spacers are more complicated but also offer way more flexibility. For example, if you build a widget like this:

This is just the top of the ice berg for spacers. They become much more important in the next update

I am very new to this and have a question or two. Would it be possible to create a widget that launched iOS apps? For example, if you just has a widget with a text list of apps and you click on the name of an app, could it then launch the app? Or would the text be too small for the phone to reliably know what text you are touching?

Right now I believe 3rd party apps can’t have their widgets have multiple tap targets. You could, on tap run a script or shortcut which then displays a menu of apps to open.

Thanks! I will give that a try.

You could launch apps with URL schemes right?

Thank you for the clarification Simon! 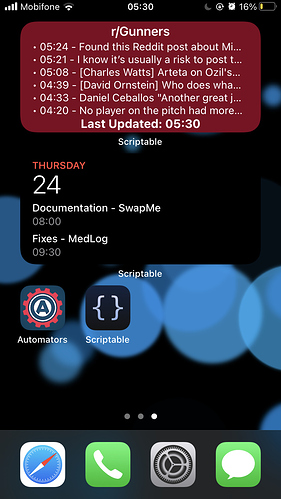 Then, assuming you can pack tap targets tightly in a Scriptable widget, you neatly get round iOS’ very wasteful layout.

That would make Widgets much more appealing.

Total newbie here, trying to learn by creating a super packed view to my calendar. I’m tweaking the code by @mzeryck (love you, man).

Q: How do you use different text stylings on the same line? Imagine a list…

…where day is red and title white.

All examples I find here have only one variable per line. I see how you can stylize that.

Using addText per variable places them on separate lines.

I’m glad you like it! You’re right that addText only allows single lines of text. This is a limitation of the Scriptable app itself. However, Simon did mention that horizontal layouts may come in the future, which would allow the layout you described (since text could theoretically be formatted individually in each column).

So, looking at the example widgets here, none of them do anything explicitly to refresh. (And I’m replying to you because you answered the question about refresh.)

I have two questions on this:

And, since I mentioned a button, is it possible to simulate an array of buttons in a widget? Perhaps by use of an image I can tap on and whose tap coordinates can be queried?

The “array of buttons” thing would be good because it would enable me to cram more in than iOS natively allows.

(Looking at the docs I don’t see anything about interacting with a widget. So maybe the above isn’t feasible.)

Ok, thanks! By trial and error I finally got the widget to do otherwise what I wanted, a compact event list with week number 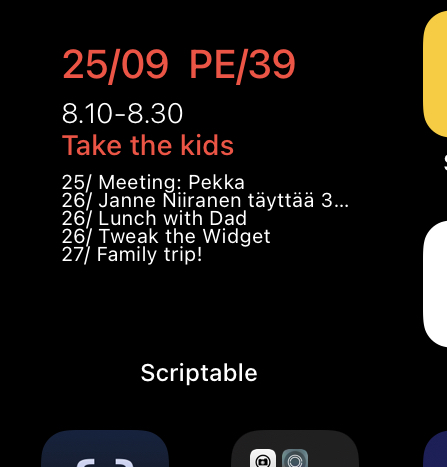 I feel so good about this.
Your code helped me to figure things out.

I’m on the TestFlight beta. This I will test.

But at least for now I have the basic mechanics of a Scriptable widget - and found examples and the docs.

This is going to be fun…

Hi Erkka. When do you plan to post the code? I figure out that your widget completely fit my needs

Is there a way to make the widget’s background gradient dynamically changing?