What features should be added to Shortcuts?

Here’s my feature wish-list, based on being a relatively novice user:

If any of these are already included, please let me know!

In some cases you can take a step towards some of this by splitting your Shortcuts. You can then group actions and call them via one run shortcut action. That effectively locks the group, collapses it, and allows it to be moved as one action. Certainly not perfect and not applicable in all circumstances, but it does allow reuse and is an approach that you can utilise in the current release.

As for step by step debugging, we’re beholden to the time honoured approach of popping in a quick look or show results wherever we want to check. Again not ideal but probably the best general use option for now.

Yes, making modules is a good workaround and I’ve got a few already.

Yes, that would be handy, but there is a also a workaround for this:

Make a shortcut with your favorite actions, arrange them in the order you like and then just add one after the other to the favourites. The shortcut also syncs to other devices.

To me the main focus should be on usability and curation.

Like many other iOS things it doesn’t use the real estate well.

Further tagging and folders would be handy.

Yes, we have colours for our shortcuts but that’s not very semantic, so tagging would be more useful, and tags would work as a proxy for grouping too.

Would work as a proxy so long as a tag search were possible.

Actually I’m not a big fan of folders - as an item can (sanely) be in only one folder. Multiple tags are better.

I just had the idea of combining folders and tags. If you tag multiple shortcuts with the same tag, automatic grouping of them like a folder would be quite nice. And if a shortcut has multiple tags, it is also shown in multiple tag-folders.

That sounds suspiciously like the idea of smart folders…

Say No to Folders in Workflow - Home - Thought Asylum

As I mentioned in yesterday's post I have quite a few Workflow app workflows on my iOS devices....

Tags could appear under the search field something like this, so tapping a tag would narrow the view to just those shortcuts tagged with e.g. “work”: 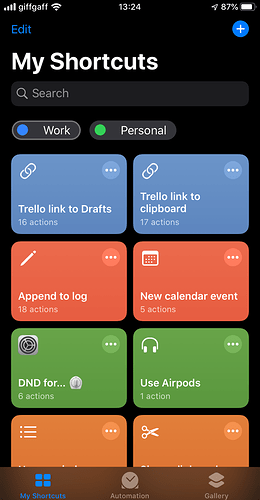 I’m not suggesting relating the shortcut colour to the tag colour, that would be too restrictive.

So the way this would work, hypothetically, is that tag(s) would be applied in the action’s settings (where icon and name are edited) and the tag selector would appear under the search field but would usually be hidden as is the case with the search field. Tags would obviously be the system tags, not specific to Shortcuts.

What is your use AirPods Shortcut for?

Quicker than control center when switching airpods between devices.

Ability to ‘hide’ shortcuts, or put them in folders.

Ability to ‘transfer’ a shortcut, I.e. ‘if running on watch, restart script on phone’

I’d like the ability to extract substrings from Siri requests.

I’d like to be able to say “Hey Siri get bus detours for the 17” or “Hey Siri shuffle TV show Better Off Ted”.