Perhaps a dumb question: I would like to create a Mac shortcut to save my typical startup window layout. So I’ve used the Save Current Window layout action to save a layout called “Standard”. Where is that name and the associated data saved so I can call it again using the Restore Window Layout action (in a different shortcut)? Do I need to save the layout name in DataJar?

Shortcuts for the Mac has both “Save Window Layout” and a “Restore Saved Window Layout” actions. Unfortunately the dearth of documentation for the Mac version of shortcuts makes finding more detailed info on these actions near impossible (waiting on @MacSparky 's updated Field Guide in the worst way!). The unhelpful info panel for the restore window layout action reads as follows: 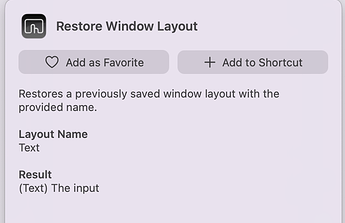 But where is the “provided name” stored that I can call it (and its associated layout data)? Sure, I suppose I could include both the save and restore layout actions in the same shortcut, but what would be the point?

Any help would be greatly appreciated!

That isn’t a native Shortcuts action - that’s a Better Touch Tool action that has been made available to Shortcuts. You can tell from the icon.

Therefore you should not require Data Jar or any other persistent storage. That’s built in to the app offering the actions.

Thank you! I should have looked at that icon more closely. This was driving me crazy!