Personalized Emails based on reporting for my team

Would love to get some help with automation! In my current work we are looking for a way to send out personalized emails that can report an individuals results. Similar to what mail merge used to be in iWork (hoping for the return of this feature). I want to create a sheet for data and then send emails based on the data.

Are you using Apple Mail, or another e-mail client application?

I’m want to use Apple Mail, Numbers and Shortcuts if possible.

Okay, here’s a shortcut from RoutineHub that works based on contact groups, but you could amend that to read contact data from another source if required. The principle is the key thing, and I would guess it should work as well on macOS as on i*OS; but obviously, do run some tests before using it in anger.

Finally. A simple way to mail merge on iOS.

Also keep in mind mass e-mailings can be flagged as spammy (different mail providers vary from hundreds to thousands on this) if you send them out too quickly in large groups. If you are doing things at high volume, consider breaking it down into smaller groups.

This is great! It can build the emails. I need to figure out how to format and then look for a numbers sheet to pull data.

I don’t see an option to read from Numbers, only add. 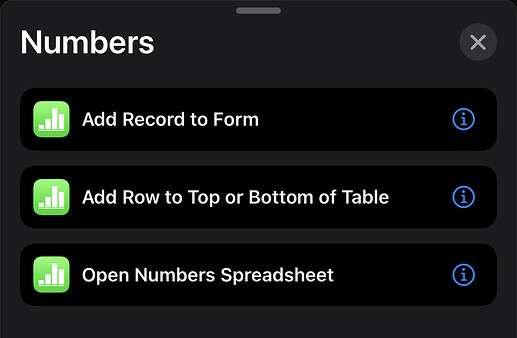 Maybe consider saving to an alternate file format like CSV that you could read from Shortcuts directly?

I saw a way to convert a numbers sheet to CSV. Would that give me more options? I want to be able to lookup a persons name then report data based on their name in the email from the sheet

I saw a way to convert a numbers sheet to CSV.

It is a standard plain text format for spreadsheet software, including Numbers, and is a plain text file format which can be read directly by Shortcuts; hence the suggestion that CSV might be a good choice.

Would that give me more options?

It is an option, whereas trying to read Numbers directly isn’t a native option for Shortcuts right now. I haven’t seen a third party Shortcuts helper app that would enable it, but there may be one. Similarly there are other options to managing data than Numbers. Some helper apps allow improved access to Google Sheets, or you could use Airtable and access it directly tly via the API.

If by report you just mean include data for a person, and by lookup you mean include each person in the file, then that’s fine.

If you actually mean trigger a user controlled lookup of people, then you would probably be better off with a database style solution like the inbuilt contacts or Airtable - but you did start off with batch generation rather than ad hoc generation of e-mails.

You can do this with a CSV file, but databases are designed to easily lookup data. Modern spreadsheet software often incorporates database features, but that is part of those apps and mot inherent in the way files are accessed (e.g., CSV).