On my way to work shortcut

I’m looking for some help, I’m not good with this stuff but am having fun playing with it.

I made a short cut when going to work and it was working fine. But now I want to add it telling me the weather and also if possible when I get to work to automatically text a contact in my phone. I’m having trouble figuring this out.

This is what I have so far…

Sure. You can use the Speak Text command (or Show Result if triggered by voice) to get Siri to speak the weather out loud to you.As for the location trigger, you can use Launch Center Pro or IFTTT for that.

But if I use LCP will it be part of the workflow or I have to do that separate?

Unfortunately, that will have to be separate. Shortcuts has no mechanism for auto executing but LCP does.

Thanks for the help. One more thing, do I need a variable in this work flow?

As for needing a variable, that really depends on how you want it to end up working. From the looks of it though, all you need to add to the Shortcut is the Speak Text action/command.

For the automatic text message, LCP can’t execute a Shortcut on its own, but rather present you with the option to execute when the location trigger fires.

Someone else might be able to speak to that though. Or, that might be exactly what you want. Play around with it a bit and if you get stuck post it here and I/we’ll help you out however we can!

I added speak to text and it’s not working for the Esther but it’s fun playing with it.

The reason the weather isn’t being read allowed by the speak action is that the Dark Sky Action isn’t passing it any weather details as text. The action passes any input it receives directly to the next step. 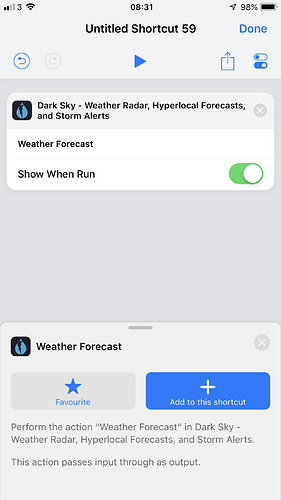 For me that action doesn’t seem to do anything at all. Regardless of my location and notifications settings, Shortcuts just whips through the action.

If I set a Sri shortcut for the Dark Sky Action it reads it aloud. So I wonder if this is a bug in something?

The alternative would be to either query the Dark Sky API directly or use the Carrot Weather app and its Shortcuts.

@sylumer I didn’t think the shortcut was doing anything with dark sky cause it would skip it. I thought I did something wrong, thanks.

And, I didn’t test it so I didn’t see there was an issue there. Thanks @sylumer for picking up my slack

So will any shortcut app speak to you, or the developer has to put it in there app? I mean doing it on the shortcut app

Siri will speak any text you provide it. You can use a regular Text action to put in some pre-defined personal messages you want it to say, or, if another action (like DarkSky or Carrot etc) have a return type of “text” it can speak that too.

Look at the info on each action to see what it accepts as input and what it pushes out as a return.