Update: just fixed a minor bug in refresh for Flagged and Forecast-Tagged widgets – links updated below! Thank you everyone for the tremendous support of my first cut at making widgets for Om…

Hope others can get some use from these - let me know what you think! I tried to account for a lot of detail in design and features, but the feedback and ideas from this group would be super valuable.

Interesting: App Store says it’s not available in my region. (But then I only tried to view it from my iPad - so it might be an iPhone versus iPad issue.)

Can someone else using the UK store confirm if it’s available to us?

Same error, but this link works for UK 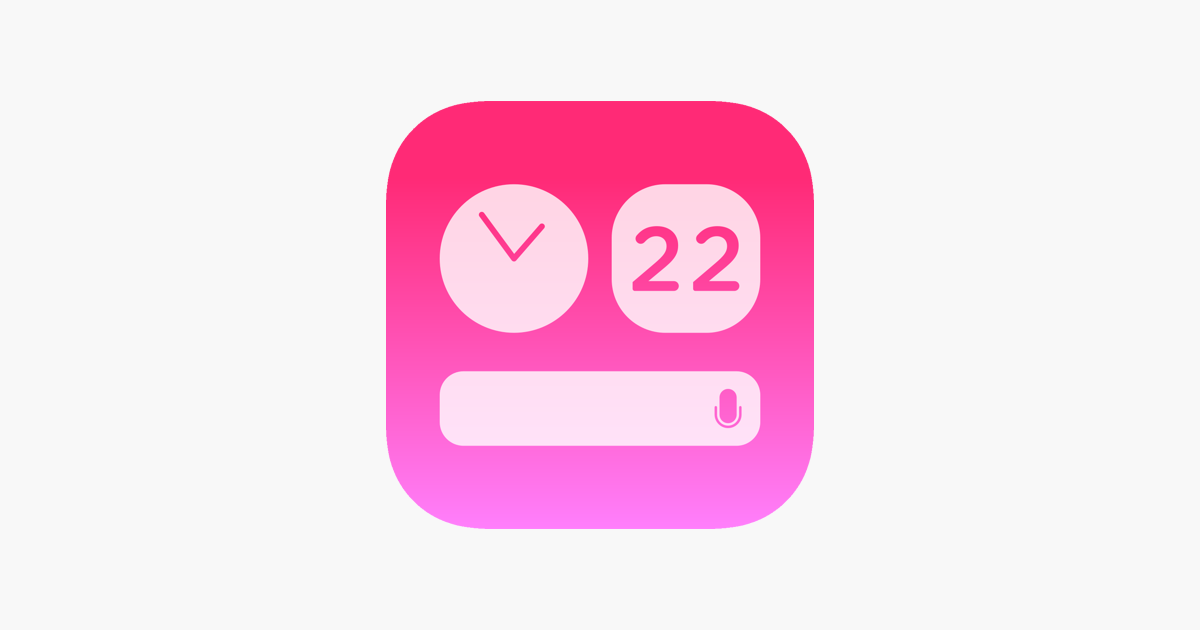 ‎Create your own Widgets with Shortcuts. With WidgetPack you can use the power of Shortcuts to design your own widgets. Use and modify the built-in examples to get started, or create a widget from scratch and unleash your creativity.

Thanks! While I probably will buy it it’s a big “take on trust” that it’s worth it - with an up-front purchase like that.

It may be an older version, but serviceable to check it out.

Same error in Australia. If you search for it in the app score rather than using the link in @heyscottyj’s post you might have more luck

Yeah I just linked to their website for ease, because I couldn’t think of a better CTA

Thanks. The latest Testflight from that link is a few days old - and might not be for the latest release. But it gives me a good starting point.

Yup, I’m pretty sure the latest builds skipped TF and went right to store, but what I made should work fine in that version. I think. Probably. Almost certainly. I’m sure.

Btw, thanks for making that widget!

I’ve found myself using Reminders a lot more since widgets became a thing in iOS14 - I kept hoping for an OmniFocus widget (I was using iOS14 during beta, so I’ve been hoping for a while) - and I was near the point of moving some of my tasks permanently to Reminders when I saw your OF Widget post.
I’ve been using it for a couple of days and it’s been fantastic (although I admit to tweaking it to showing a custom perspective)!

Of course, I’m now going down the rabbit hole of playing around with WidgetPack, but that’s a whole different story…

So, to reiterate, thanks for making that widget!

That’s awesome! And I tried to make it so that changing its OmniFocus content would be easily enough done. I’m glad you’re enjoying it!

About every two years, I think I’m going to try Reminders for a built in and native way of doing stuff, but I’m just too high maintenance and have a lot of muscle memory about OF. I hope for utile native widgets from them, but this is my stop gap.

What other widgets have you tried making so far? Just trying to get some inspirations.

When I get the time, I would love to grab stuff out of my work task systems via its API and display counts and content, but I haven’t gotten around to it.

It might also be neat to make a sort of dashboard widget that condenses maybe things into one widget, like weather, activity, and calendar, but the refresh rate of the widget isn’t super fast, and of course relies on Shortcuts being run.

Maybe this might inspire something? Love others’ ideas, too!

So the latest Omnifocus TestFlight beta has Widgets tweaks. I’ve yet to play but it shows they are listening…

Hi. I did something similar (though not so pretty). I merged in my latest calendar events too and made calendar events link back to fantastical, OF tasks link to OF, and inbox/flagged/due link back to the appropriate forecast page. I even threw in the weather summary for the day which links back to carrot.

Just to make it as unnecessarily complicated as possible I did the data gathering in shortcuts (except for the calendar) but the rendering in scriptable (I was exploring scriptable at the time and was a bit obsessed). The data export run by an automation on OF closing.

Anyway, just mentioning for the sake of inspiration. 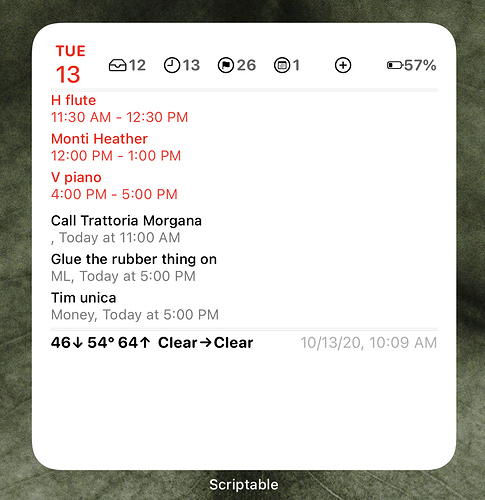 Could you share your Shortcut for this please? I’d love to see it!

I’ve set a timed automation on Shortcuts to those scripts first thing in the morning, so even if I forget to do it myself, at least the list is up to date as of that day.

I especially like the dashboard at the top of your widget showing the number of items and your battery level. Does the battery icon change depending on the amount of charge your phone is on?