Is this shortcut possible?

I’m really not very good on getting a grip on Shortcuts. I suspect the answer to this one might be “No”, but I’ll ask anyway.

One thing that I find myself doing a lot is if I’m watching something on the iPad with my family I don’t want to be interrupted by my usual notifications. I go into the settings and turn off my notifications by going to Notifications/Show Previews/Never.

It would be great if there was a spoken automated shortcut they would automate this upon command.

Thanks so much for considering it.

It is possible. In fact, it is a frequent example of a shortcut. There’s A couple of ways to do this, but the simplest is a shortcut that turns on DND (Do Not Disturb) for a preset length of time. 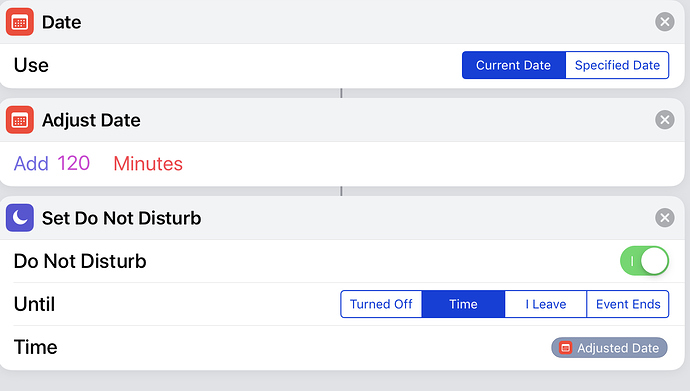 Thanks for the quick response. I’ll have a look at this.

Of course there are a couple of problems with this approach I’ve discovered (as well as discovering something quite cool too). So let’s start with that. So I discovered I can just say

“Hey Siri - turn on do not disturb” top activate this without the use of a shortcut at all. Deactivation works the same.

Firstly I want this function to run on my iPad usually not my phone! So I’ll presumably always need to reactivate my phone assuming my iPad can be put in and out of DND mode this way in the first place?! I’ll need to check that!

The issue I had with creating a shortcut to DND was that it was good for activating it… but There was no way to deactivate it unless I manually intervened.

Hence why discovering the voice activation aspect I mentioned earlier seemed quite cool (if that makes sense).

Shortcuts sync from phone to iPad if you are signed in to iCloud. If not, you can share the shortcut (Box with appointing arrow) via messages or email.

Once you’ve created the shortcut I showed there is a setting icon (two oblongs) in the upper right. In there you can set a phrase to activate siri. Mine is “Movie Sign!” albeit my shortcut is much much more complicated that then sample I showed you, but I have different settings based on location (If I am not at home it is based on location, not time, unless I am at a specific location) and it does more than just turn on DND (turns down the screen and volume and turns on energy saver). But the basic actions will do pretty much what you described, turn off notifications for a couple of hours and then turn them back on so you are not interrupted during a movie.

The shortcut that I showed will deactivate after 120 minutes.

Ok. So what I realised is that I don’t have “Hey Siri” activated on my iPad… therefore holding my hand on the home button and saying “do not disturb“ gets me what I want for both activating and deactivating so… @lbutlr you have inadvertently solved my problem (albeit with some manual intervention)

If I’m right… Your original suggestion would have meant that deactivation was based on time I.e. the 120 mins, rather than being voice deactivated!? Is that correct?

If I’m right… Your original suggestion would have meant that deactivation was based on time I.e. the 120 mins, rather than being voice deactivated!? Is that correct?

The shortcut @lbutlr gave a screen shot of gets the current time, adds 120 minutes to it and then passes that adjusted time to the do not disturb action which it set to end at a specific point in time; specified by that adjusted time.

in my example, yes, but you can have deactivation based on a number of things, including arriving or leaving a location, calendar events, and a specific time. Or, the default “until tuned off”.

I have short-cut for driving home which turns of DND when I arrive home, for example. I have another one that turns on DND until my ETA which I use for other locations (this does require that I set the shortcut to go to a specific place)

You can also trigger HomeKit devices through shortcuts. So y “TV” shortcut turns down the lights.

I ’m not so sure this do not disturb is the best way to manage what I want. I think I might be back to square one.

I’ve noticed that it’s not stopping the notifications from coming in as I expected it to.

There is no granularity to allow me to decide which notifications are okay and which aren’t. They all must be off and yet they clearly I’m not.

Interestingly I came across this article today which perhaps confirms my suspicion in that it is not the right method for me. I’m back to needing to create a shortcut that does this for me or go back to doing it manually. 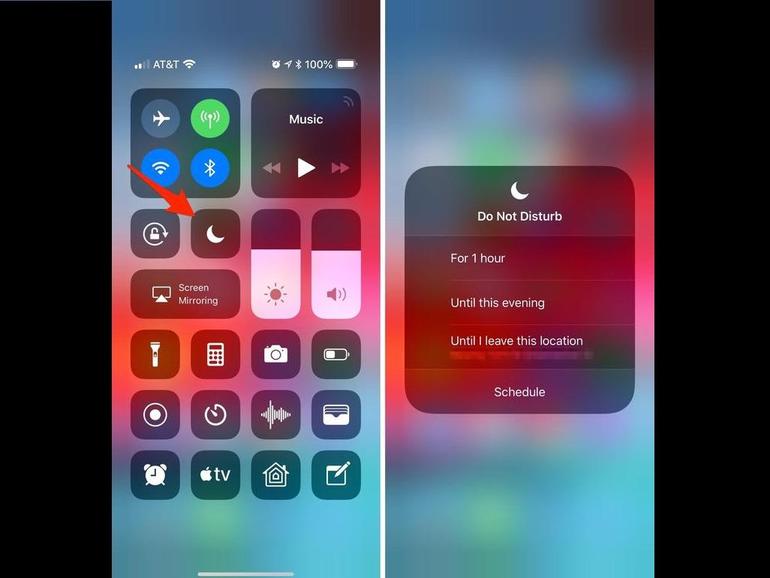 Even in 2019, the iPhone's do-not-disturb capability is firmly grounded in the olden days when voice calls were king. And it's unreliable, too.

I say to the author of that article … “did you have the allow repeated calls in three minutes option set on or off”. He doesn’t mention it, but it could explain a lot of what occurred if he did have it set on.

Unfortunately I don’t use DnD much myself. I don’t get a lot of calls or notifications so isn’t an issue for my normally. On the handful of occasions I have used it, it’s been fine.

That article is absolutely horrible. I don’t think they know how the settings work. In DND settings there is also an option to silence Always or When iPhone is Locked. All notifications will be turned off if Always is selected, and this includes messages/texts.

Thanks… you made be take a step back and have another look at those settings. I was able to change them to include all notifications always rather than just when the phone was locked.

This made all the difference.