Hi all,
The “Force open in” workflow in Shortcuts suddenly won’t accept images from the Photos app. It always worked before. Now it says “… couldn’t convert from extension item to text”

I use it very often to force open a selected image in Snapseed, since Snapseed doesn’t appear in the share sheet.

I know there are Snapseed shortcuts but they don’t work starting from an image you have already selected - they show you the whole library of images instead!

Grateful for any help

A shortcut I made to upload photos to Dropbox and create a markdown link just stopped working. To troubleshoot, I created a share-sheet shortcut to accept only images and do a quick look of the image. It doesn’t work either — it shows (null) instead of the image. Maybe an update has broken images in Shortcuts? 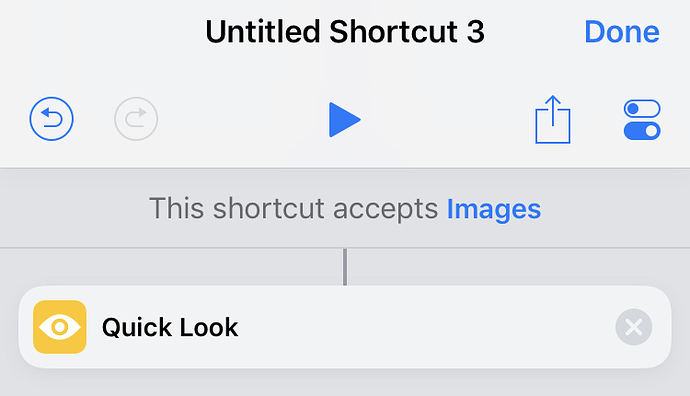 Take a look at this discussion.

Problem sharing from Photos to Shortcut as Share Target Shortcuts

Hi Folks! I have a shortcut for food tracking that starts by sharing a photo from Photos to Shortcuts and selecting my shortcut. Yesterday it stopped working, mysteriously, giving me errors about being unable to convert “Extension item to text”. I created a test shortcut that accepts Images and Media via share target and was able to verify that the shortcut is not receiving the photo, instead getting an “Extension item” that renders as (null) in Quick Look. I’m running Shortcuts 2.1.3 (updat…