I’ve been using the ability for Siri to “add this to reminders” in the OneNote app, that makes a linked reminder. Does anyone know how these linked reminders work/are made? I’m assuming some kind of URL scheme. Id like to use this type of linked reminder in shortcuts (or scriptable).

I think that might be a special Siri “thing” where it can hook “this” into things. I’ve seen the question asked on how to build this before (it came up around Workflow quite a few times), but I’ve not yet seen an alternative that does just this. I suspect it uses URL schemes behind the scenes for at least some, but I’ve seen examples where I’m not convinced there has always been a URL scheme at work … or at least not “known” ones.

There are other options though that may align to what you are thinking.

Not exactly the same, but perhaps close enough?

Basically what I’m trying to do with it is to be able to incorporate these document links elsewhere, and find a way to make them without the verbal command (and look like a crazy person on the train).

Ah, in that case, another thing to consider then is the option below. I have it set for exactly that sort of reason. 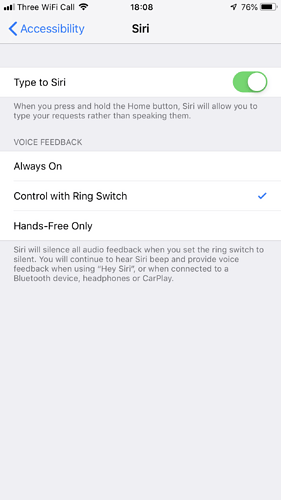 Trigger by voice command still works as usual. It’s just the trigger by press and hold that uses the types entry.

Oh, other way around, me talking to Siri. I rarely turn on the audio on my phone. It’s weird it isn’t a sharesheet option.