I’ve got a shortcut where I’m trying to select and send the same photos and message to several contacts in separate messages. I can’t seem to get the shortcut to insert the nickname for the contract I’m messaging.

I’m using a repeating loop to set a variable each loop to one of the contacts. Then, I have it send the selected message and photos to the current contract, before moving on to the next contract. However, when I tell it to pull the nickname for the contact, it returns a blank. Pulling the first name works fine. I also tried another script to select the same contacts, without the loop and variable, and that pulls the nickname fine. Any ideas? Is the nickname not getting passed to the variable for some reason? 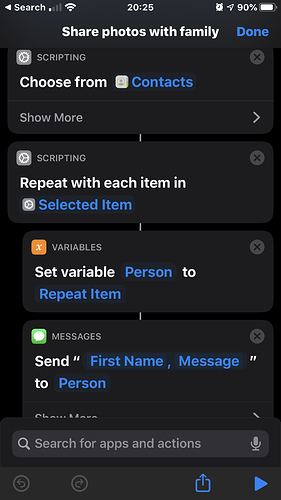 It would help troubleshooting if you sent a link to the full shortcut. Absent that, perhaps the following example will help you.